January has arrived, and along comes people’s new year’s resolutions, changes for self-improvement and people plastering ‘new year new me’ all over their social media. One trend that has grown in popularity since 2014 is attempting Veganuary-  meaning to try a vegan diet over January.

Demand for meat-free food increased by a staggering 987% in 2017 (1) and going vegan was predicted to be the biggest food trend in 2018 (2). Fast food chains now have growing pressure to sell vegan and plant based products. PETA released “PETA is calling on Greggs to heed this growing demand, add a vegan sausage roll to the menu, and watch the cruelty-free treats fly off the shelves”.

So what have Greggs done about this?

First off, the leaked email. Probably one of those savvy marketing ‘accidents’ that companies do for an alternative was of attracting attention. But who cares? It was effective and enticed a devoted group of vegans to anticipate the release.

Next up, the surprise mock Apple-style release

Poking a bit of fun at themselves, they released dramatic music that could have been in an episode of Game of Thrones, paired up with that classic white packaging along with ‘designed in Newcastle’ over the well known ‘designed in California’. This really has made an entertaining first impression.

It has even caused a tad of controversy over Twitter: 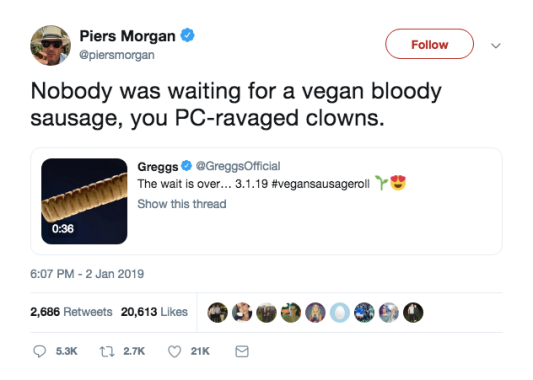 With Greggs’ social media team responding back with a host of witty responces on their twitter account to people, including big names like Piers Morgan, its really shown that the word is out- resulting in them trending on twitter. The sales numbers over this product will come of much interest to not just me, but other fast food competitors who may be also considering to release a vegan product to their range.

View all posts by Charlie Ellis

Connect to my Linkedin: